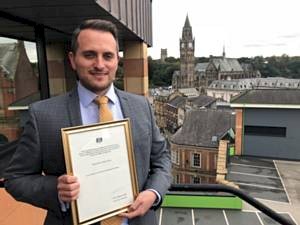 Richard Michael Dobson-Mason, our Associate Solicitor was sworn in as a Justice of the Peace on 21.9.2018 at Manchester Civil & Family Justice Centre.

His appointment was no mean feat as, due to the extensive, vigorous application and vetting processes, only thirty percent of hopeful applicants are appointed to the Bench. This is great news for Richard who has spent his adulthood devoted to studying and practising law.

Becoming a Justice of the Peace

Richard originally applied for the position in May 2017 and was appointed the following year in May 2018, with the swearing-in ceremony taking place recently where he was amongst a total of 27 people to be honoured by assuming the title of Justice of the Peace.

The process to become a Magistrate is a long one, which includes a number of interviews, tests and court visits. However, Richard will still have to wait to sit on the Bench until he completes further training and court viewings, which he hopes to complete by the end of the year.

On being sworn in, Richard said: “I am delighted to have been appointed as a Justice of the Peace.  Magistrates play a vital role in administering justice and deal with, at some point or other, the vast majority of criminal cases passing through our criminal justice system.  I am immensely proud and privileged to have joined the Greater Manchester Bench.  The application process was long and challenging but extremely worthwhile and caused me to reflect on my own views and attributes and to pay closer attention to issues affecting the communities around us.”

What is a Justice of the Peace?

A Justice of the Peace is a Magistrate or Judge who hears cases in their local community, including the criminal courts, family courts, or both. There are six key qualities required to become a Magistrate – these are: good character, understanding and communication, social awareness, maturity and sound temperament, sound judgment and finally, commitment and reliability.

Most criminal cases begin in the Magistrate’s Court and around ninety percent are completed there. As a Justice of the Peace, Richard will be dealing with a range of cases and hearing types including trials, the entering of pleas, bail applications and related restrictions as well as sentencing, amongst other things.

When asked about his appointment, Richard said “I am very much looking forward to my first day sitting on the Bench, to being a part of the Judicial System, and to supporting, rehabilitating and protecting the local community.”