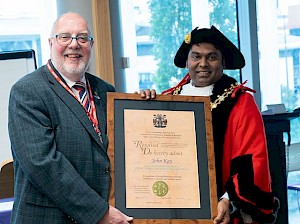 Twelve local people who have made outstanding contributions to the borough have been honoured by Rochdale Borough Council.

Six community champions and charity workers, a local businessman and a former medical director have been given the freedom of the borough, while four former councillors were made Aldermen. The civic honours were bestowed at a meeting of the council at Number One Riverside in Rochdale on Wednesday 19 October.

John Kay, consultant at Molesworth, Bright, Clegg Solicitors and former president of Rochdale Rotary Club also received the freedom of the borough. Involved with several charities he was a director of Rochdale Enterprise Agency, chairman of the NSPCC Rochdale business group, a director of Rochdale Deaf Society, the Children’s Rights and Advocacy Service, and Rochdale Connections Trust.

A member of Greater Manchester Chamber and deputy chair of the local strategic partnership. John has had many other roles over the past 40 years, including supporting Littleborough Civic Trust and Littleborough Coach House. In 2018 he was awarded Man of the Year by Springhill Hospice.

He described the honour as “a wonderful surprise.”

Sheila Acton was awarded freedom of the borough in recognition of her remarkable contribution to community and voluntary activities for over 50 years. She has been volunteering locally, supplying countless hours of her time, beginning with the Girl Guides movement in 1970.

Sheila is chair of Syke Community Base which opened in 2002, vice-chair of the Voluntary Sector Partnership, a member of Friends of Rochdale Town Hall, Rochdale Rotary and a recipient of the prestigious Paul Harris fellowship award. A former Rochdale Woman of the Year, in 2007 she received the Greater Manchester Community Star award for her contributions to the community and voluntary sector across the borough.

Described by Councillor Ashley Dearnley as “a bright star in the borough,” Sheila said: “I am so proud and happy to receive this accolade.”

Razia Shamim was also awarded freedom of the borough. She received an MBE in 1998 for services to housing and community relations and is chair of the Pakeeza Women’s Group, as well as a member of other local voluntary organisations aimed at reducing isolation among women, promoting cohesion, health and wellbeing. Razia has helped raise thousands of pounds for various organisations, both in the UK and abroad.

“Thank you to everyone who has supported me, and been on the journey with me. I have been surrounded by good people and a wonderful family, I feel very blessed” she said.

Dr Musharraf Hussain, was made a freeman of the borough. He served Rochdale for over 40 years as a hospital doctor and then as GP at Healey Surgery until his recent retirement. Musharraf was also the clinical director of Rochdale PCT and continues to be a proactive community ambassador, supporting several local community enterprises involved in healthcare and mental wellbeing.

Ghulam Rasul Shahzad was also made a freeman of the borough. A recipient of an OBE from the late Queen Elizabeth II for his services to the community, the retired magistrate is a member of several local voluntary groups.

On receiving the award he said: “I feel truly humbled and I thank you from the bottom of my heart.”

Saeed Dar was made a freeman of the borough in recognition of his significant contribution to education and the community.

He said: “I am very pleased to accept this award, it is very kind and much appreciated.”

Javed Akhtar and Ali Asghar were also made freemen of the borough in recognition of their significant and continued contribution to the community, and their voluntary activities.

Upon receiving his award, Javed said he was proud and grateful: “I have had so much love and support from the Rochdale community, I would like to dedicate this award to my parents.”

Ali Asghar was unable to attend and will receive his award in the coming weeks.

Former councillors Tom Bailey, Mohammed Sharif and former mayors Keith Swift and Ian Duckworth were made honorary aldermen, in recognition of their services to the council.

As announced earlier this month, Rochdale-born England and Barcelona midfielder Keira Walsh is also to be awarded freedom of the borough.

Her presentation will be held at a later date to be confirmed, due to her sporting commitments in Spain.